The Rationalist Association of NSW

The Rationalist Association of NSW was founded in 1912. We define rationalism as the attitude of mind which unreservedly accepts the supremacy of reason. It is a system of philosophy and ethics independent of all arbitrary assumptions or authority. Rationalism was a movement that emerged in the second half of the 19thC, particularly in the wake of Charles Darwin, whose book, Origins of the Species, provided a scientific foundation for thought independent of religious speculation.

Rome says no right to freedom from religion

The Holy See's Permanent Observer told the UN's 37th Session of the Human Rights Council in Geneva that freedom from religion is not a right and the expression 'freedom from religion' is "of the utmost concern" for the Holy See since it betrays a patronizing view of religion." He quoted Pope Francis: "religion itself, the religious dimension, is not a subculture; it is part of the culture of every people and every nation."

Delivering the response of the International Humnist and Ethical Union, Director of Advocacy Elizabeth O'Casey listed the established rights which constitute freedom from religion (click on image for these) and highlighted why freedom from religion is so necessary for those professing no religious beliefs around the world.

O'Casey reminded the Council that 85 countries severely discriminated against non-religious individuals and 7 countries actively persecuted the non-religious during last year. "So long as the rest of the international community stay silent, the rights of the invisible minority of non-believers across the world will continue to be trampled upon, including by members of this Council."

O'Casey's response can be viewed here. 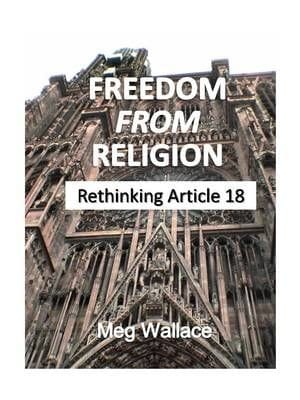 HUMAN RIGHTS UNDER ATTACK IN AUSTRALIA, SAYS THE UN

The Australian Government has been strongly criticised for the "chilling effect" its actions have unleashed on human rights defenders in Australia in a UN report released last week, and Special Rapporteur Michel Forst told the UN's Human Rights Council he was "astonished" to observe "mounting evidence of regressive measures" being pursued by the Government. See here.

LORDS COMMITTEE: RESPECT THE LAW BEFORE “THE VALUES OF OTHERS”

Also, federal and several state governments have STOPPED COUNTING COMPLAINTS against the school chaplains program and NO STATES KEEP RECORDS of the faith of those providing pastoral care.  See here.

" ...the power of the presidency isn't the only way Christian nationalism is advancing its agenda in America today... A  coalition of Christian right groups have organized a major legislative initiative called "Project Blitz." Its goal is to pass ... Christian-right bills at the state level, whose cumulative impact would be immense." Read More